It’s a normal day, not unlike any other, and you were peacefully sleeping on your countryside house’s porch. If you play a lot of zombie games, then you know this doesn’t end well. You’re rudely woken up by the sudden zombie infestation. Well, no choice left but to survive right? So pick up your guns and melee weapons as you try to go through wave after wave of zombies in Zombie Incursion. 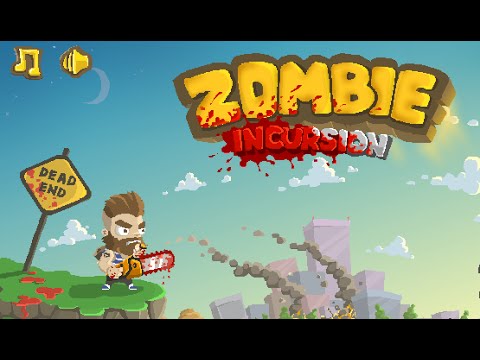 Zombie Incursion is an action game filled with chainsaws, guns, and zombies. You’ll play as a guy who wants nothing more than to survive this apocalypse. You start off by being placed in the middle of each level you’ll play. It plays out mostly like a tower defence game where zombies will come out from the right side of the screen trying to get to the other side. Your job is to make sure they don’t get there. You’ll move around the area using the W, A, S, and D keys. You’ll attack using the left mouse button. Your attack changes as you change weapons, but you’ll start off with a chainsaw – which is alright and fun to use. Each zombie killed will award you with gold, which you’ll then use to buy upgrades for your current weapons, buy new weapons, or buy armor. You’ll also have a health bar that’ll go down if you stay directly in front of a zombie for too long without killing it, so make sure to either stay away or kill them quickly. There will be different types of zombies as you go through the game, most of them requiring more shots than a regular zombie so be careful. Also, there’ll be occasional boss fights, so watch out for those too, and always make sure you’re prepared.

Zombie Incursion is one of the funnest zombie apocalypse games I’ve every played, and it had me hooked for a couple of hours. If you want to play a game that’s fun and filled with action (as well as a nice game time since upgrading everything is pretty fun), then Zombie Incursion is definitely the game you’d want to play.