Casual games aren’t always half as bad as hardcore gamers would like to think they are. Viking: Way to Valhalla is a very good example to prove this. Not a lot of casual puzzle games can pull off the same quick adrenaline you get from casual games with the same amount of interest you get for adventure games, and this game does very well in both accounts due to its very unique gameplay style along with very good mechanics. 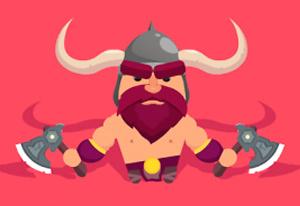 Viking: Way to Valhalla is a puzzle game by CrazyGames.com that mostly plays like the Candy Crush games where you line up the same type of blocks with each other and break them until all of the blocks are out (or whatever goal is given to you), but for this game, the mechanic is a little bit different. Your usual board where the blocks would be is placed at the bottom part of the screen, while the top screen shows two sides, the left side showing your Viking, and the right side showing whatever enemy you are trying to kill. The objective of the game is to break sword blocks to damage the enemies, the more blocks clumped together the higher the damage. You lose under 2 conditions, which is you either run out of number of turns, or your Viking’s HP drops down to zero. There will be a lot of additional goals and obstacles in finishing each stage as well as your Viking getting skills and weapons that alter the gameplay and time you need to beat levels, so you would always be on your toes in each level, giving the game a higher gameplay time that the usual gameplay times you get for the regular casual games.
Viking: Way to Valhalla is a very good game to play and keeps you interested for a pretty good amount of time as the adventure elements of the game keep you hooked as well as the casual elements of the game. Play this game if you haven’t yet, you’ll be surprised how 2 genres can blend into one with a very good result.