American Football fans rejoice! We’ve got a game just for you, and we know you’re gonna love it. What’s not to love about a sports game filled with action? Return Man is the first game in a long series of well loved football games, and is a gateway to the one of the greatest football simulators out in the web. 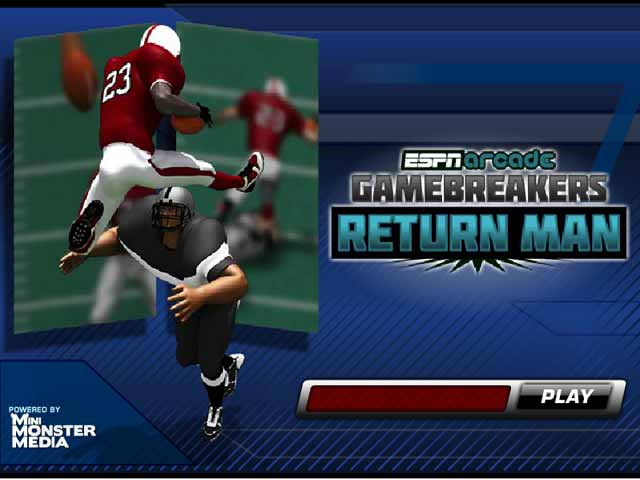 Return Man is a sports action game that lets you play as the catcher of the punt kick, and your goal is to get to the end of the field to get a touchdown. You’ll be given 3 chances to do so. Each time you get tackled and stopped, you’ll lose a chance. Each possession is basically a life, so keep in mind that you shouldn’t waste a single one. The controls are kind of weird, but for movement, you’ll be using the I key to move forward, and the J and L keys to move left and right respectively. The A, S, and D keys are used for special moves (that you’ll get later in the game). The space bar is a shortcut for continue (since it’d be a hassle to keep going back to your mouse to click on continue), and the M key mutes the game’s sound. The game will start once your character catches the punt, and you’ll be able to take control of the catcher. You’ll have to keep running until the end, and it’s not going to be easy with all the other players set up to tackle you, but it’s not a really unfair match. You’ll have 3 blockers set up to keep you safe, so make sure to use them wisely. Once you get to the end, you’ll be given a congratulations screen and move on to the next level. Rinse and repeat.

Although it might not sound too exciting of a game, Return Man pumps up your adrenaline once you start playing. We’ve played this game for an hour without getting tired of it, so that’s a good indication of how good this game is, especially for sports fans! If you love football, then dive in and play Return Man.

American football is one of the biggest sports in the world and is watched by millions of people each season. It’s a sport filled with excitement and strategy that it’s one that’s pretty hard to understand if it’s your first time watching. To make things simple, Return Man takes off all the boring parts of the game and just keeps you playing on offense. Pretty cool, right?

Return Man 3 is a football simulation game that lets you play offense, and offense alone. The game forgoes the other part of the game where you have to play defence, but that’s alright since offense is the more exciting part of the game anyway. The game is split into a few parts during your offense. The first part will have you catching the ball after the first kick. You’ll do this by walking into the yellow circle that’ll be shown on screen. The circle will get smaller real quick and you’ll have to get there before the circle completely disappears. You’ll do this by using the I, J, K, and L keys to move around and you’ll have the A, S, and D keys for your special moves (which will be explained during the game). You can change the settings to play using the more commonly used W, A, S, and D keys for movement and J, K, and L for specials. Your goal is to get a touchdown by avoiding all the defenders coming your way after you catch the ball. You’ll have a few blockers on your side to take care of the defence, so make sure to take advantage of them. Every time you get a touchdown, you move on to the next level. Each level will have a different stadium with different conditions like rain that’ll wet the grass. This will also affect any available powerups in each stadium. Be careful and plan your moves ahead of time as you’ll have a limited number of runs per level.

Return Man 3 is one of the fastest paced football games I’ve ever played online. If you’re a fan of the sport, this game is one you shouldn’t miss out on. It’s easy to learn and has lots of exciting moments. Will you be able to get that touchdown? Play the game and find out!