Agario has been a ridiculously famous game because of its addictive, competitive multiplayer aspect. The game is so easy to learn, so fun to get into, and doesn’t really need a high level of skill to actually win, just always remember to have fun. So what happens if you mix the formula that agar.io is known for with a classic game that almost everyone knows and loves? Then you have Slither.io, a combination of the horribly addictive agar.io and the simple reflex and planning game, snake. Get ready to duke it out with the whole world in a game of you versus the world in snake. 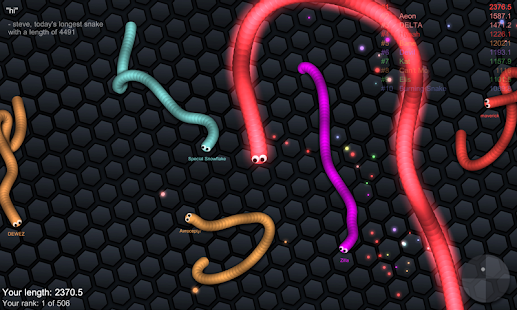 Slither.io is an online multiplayer game that makes you play as a little snake that is out for food to eat, but every time you eat food, you get longer and become a much scarier snake, out to get the bigger fish in the sea, other snakes! The goal of the game is to become the longest snake in the world by eating more and more food (represented as different stuff in the map, but mostly a dot) and snakes once you are big and long enough. Eating a snake that is shorter than you will make you grow longer than a single food can get you. There are a lot of different strategies to this game, even though it looks simple, it’s a pretty deep game. You can always eat food that doesn’t move that will make you longer pretty slowly, or you can grow a bit with foo, then start preying on the weak. The controls are so simple even kids will get it. You just use your mouse cursor to move around the screen, and your little snake will follow the cursor. Move the cursor to anything edible to your snake, and your snake eats it automatically. Are you a good enough reptile to make it to the top? Then you would probably want to try Slither.io to test out your gut feeling of greatness!