Everybody loves pizza! That’s a universal fact everyone in this world should accept. If someone ever tells you that they don’t like pizza, they’re either lying or they aren’t human. That’s why a game with pizza in it is something that you should check out, no matter what the game! 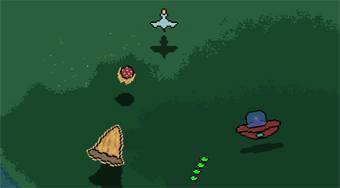 Salamis is a fighter plane simulator where you take control of a pizza that is also a fighter plane that shoots out salamis/pepperonis. And yes, before you even say it, that does sound insane, but here we are, aren’t we? The pizza flies around like a plane and you control its flight by using either the arrow keys or the W, A, S and D keys. Your plan will always go forward at a normal pace, but pressing the W or up arrow key will make it move forward faster. The S or down arrow key will make it go a bit slower. The A or left arrow key and the D or right arrow key will make your pizza turn left or right. The flight controls will take a little bit of getting used to, but once you have it down, it’s a breeze to control. You shoot out your salami by pressing the space bar. You will always only have 1 shot of salami, and every time you shoot, you’ll have to reload. Reloading is as simple as flying in a small circle (you can just hold either left or right until your pizza has a piece of salami on it). You’ll have a lot of different enemies, so you better get ready for the fight of your life while controlling a pizza plane!
There aren’t too many fighter plane simulators around, but finding one and you control a pizza? I’d call that a jackpot any day! This game is both challenging and very fun, so it’d be a waste to miss playing Salamis.