Have you ever played a game where you are Satan and trying to save hell from going under (I mean, further down since hell is already the lowest you can get)? Well, get yourself ready for Purgatory Co. A game where you try to save all hell from freezing over by working part time as Satan to send up the blue pots (probably filled with good spirits) upward and the red pots downward as a Purgatory curator. 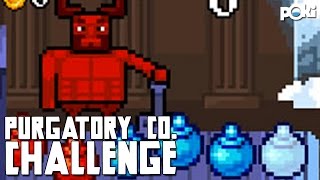 Purgatory Co is a casual game that doesn’t take too much thinking power to play, but requires complete and high concentration to actually pull off a good score. So you play as Satan working for the purgatory, sending out the good people and bad people to where they should be. The game’s simplicity is one of its greatest points, and adding an extra difficulty in a few intervals makes the game even more fun. The only controls you need are either W or the up arrow key to send the blue pots upward, and the S or down arrow key to send red pots downward. There will be a few exceptions though, like if you see a piggybank, you can send it anywhere and still get the money inside it. As mentioned, a little challenge gets added as the game progresses, like some of the pots will be inside a box and it will be impossible to find out what color it is until the box is actually opened, which is done by pressing any one of the 4 buttons given. The catch of the game is to make sure that you keep your efficiency up, which is the bar at the bottom of the screen. Each time you send a pot to the right direction the bar will go up, and for every second you don’t do a thing, the bar goes down. Make sure to always keep that bar up, because if the bar goes completely zero, then you die instantly. You also die instantly with one mistaken pot, so make sure to bring you A game or you won’t be reaching a very high score.

Purgatory Co is very fun and very addictive as it doesn’t let you play too long per session, but you feel that you are progressively getting better at it, making you want to play more and more. If you’re up for a little challenge and have the time, Purgatory Co is a good choice of a game.