Fast paced, action oriented puzzle games, anyone? Yes, please! Polar Opposites is here to satisfy your puzzle game craving with a bit of blood pumping adrenaline gameplay that isn’t a common feat for games like this. Enter a world of metals and magnets that help you open doors and escape a lot of the traps and enemies in each room you enter. 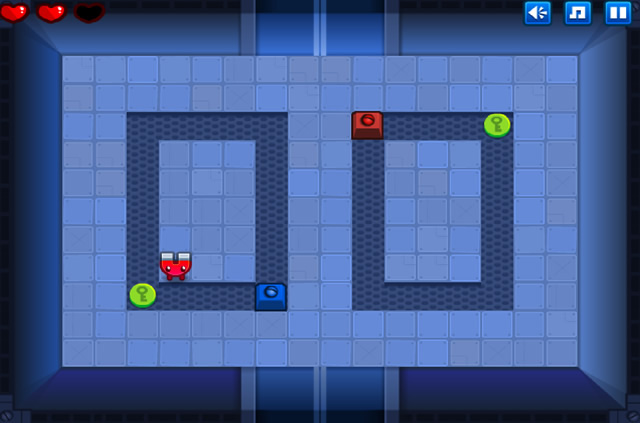 Polar Opposites is a puzzle game with a bit of fast paced action mixed in. You play as a magnet that is thrown into a dungeon with different rooms. Your goal is to get out by moving through rooms by opening each room’s door to the next room. There’s going to be different ways to open the rooms, and this is where your witty puzzle solving skills come into play. You see, being a magnet, there will be some stuff that you will be attracting and some stuff that you will be using that to your advantage (or disadvantage, whichever comes first). The different rooms will have a few different rules, too, like some rooms will need you to collect all the coins for the door to open, some will require all switches to be flipped, and some will require both. There will also be rooms with enemies in the form of spike balls and traps that you either attract or deflect due to your magnetic personality. These will make it harder to solve the puzzles in each room as you’ll have to both think and move around to stay alive as you try to move to the next room. All you’ll ever need to play, by the way, is just the arrow keys to move around.

This game is all aout fast moves and fast thinking to stay alive and keep progressing. If you’re having a hard time, then practice a bit more. You’ll be starting from the first room, but you’ll be smarter and faster the next time around, right? If you’re looking for a game that mixes quick thinking, then Polar Opposites is a great game to go with.