There’s an abundance of Minecraft based games around, but one of the more popular ones is Pixel Warfare. Take arms and go up against the opposing team as you try to survive the harsh empty world. Although the game doesn’t have too much to offer in terms of the story, it makes up for it in its great multiplayer experience. 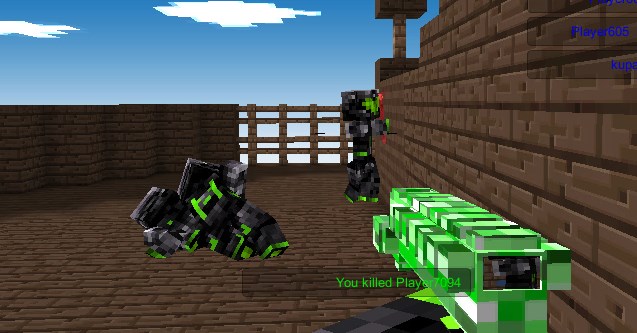 Pixel Warfare is a first person shooter based from the game Minecraft. The look and feel is taken directly from Minecraft, but the gameplay is fully different. In Minecraft, you collect stuff and craft items to survive, in Pixel Warfare, you shoot people and kill them to survive. The game controls the same as any FPS on computers (as well as the same controls as Minecraft). The W key will make you walk forward and the S key makes you walk back. The A and D key will make you strafe left and right, respectively. The space bar will make you jump. The number keys on top of your keyboard is used to cycle through your weapons (the keys bound to a weapon can be seen on top of the screen). The mouse cursor is used to aim your weapon and the left mouse button is used to fire with your current weapon (you’ll stab people if you’re equipped with the knife). The right mouse button is used to aim down your sights which gives you better aim but sacrifices your movement speed. You can always press the Tab key to view your scores. The goal is to get a better score than the opposing team when the time runs out (just like any other FPS games).
It’s always fun playing FPS games, but when you combine the Minecraft graphics, it becomes a cute little shooter where you run around killing block shaped people instead of regular looking people, so it becomes a bit more fun looking. Try out Pixel Warfare and all of its quirks (a lot of people playing online, too!). You can also check out my reviews of the most recent versions of the game (4 and 5).