The game Minecraft has been a huge hit for the past couple of years, and there have been a lot of games that has taken inspiration from the multi-million selling game. Pixel Warfare 4 is no exception, but that doesn’t mean that this game is a clone, though, it just means that this game is 2 times more awesome than it should be! 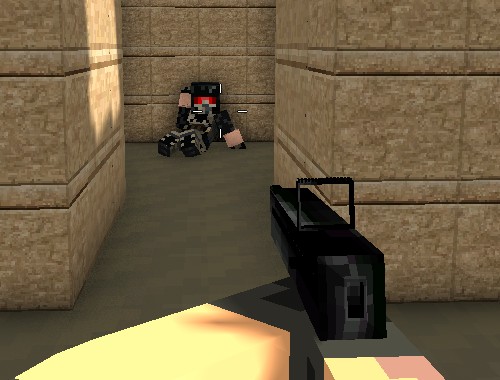 So what is Pixel Warfare 4? This game is a first person shooter that plays like a regular first person shooter, but looks entirely like Minecraft. The goal of this game is to try to stay alive until the timer runs out. Every time a round starts, one of all the players will be a zombie, and anyone the zombie kills will turn into another zombie. This goes on until either the timer runs out or everyone has been transformed into a zombie. The survivors will be given a wide variety of weapons they can use to survive the coming wave of zombies, but once they are turned into zombies, they will have nothing but their limbs to use to kill the survivors. Control wise, this game plays like any other PC first person shooter games. You use W to walk forward, A and D to strafe left and right, and S to walk backwards. You use your mouse to aim and the left mouse button to shoot and right mouse button to aim (if available).

Killing zombies (or survivors, whatever team you are one) has never been this fun! And it has never been this familiar since they are using the Minecraft aesthetics to run the game. If you are a fan of Minecraft and an even bigger fan of first person shooters, Pixel Warfare 4 may just be the game you need to quench your thirst for both.