Quick! The village needs their bonfire lit and you are the only one that can set it on fire! Oh, wait, you’ll light it using the fire that is spreading across your own body. That doesn’t sound too good, but hey, at least you burn in dignity, right? 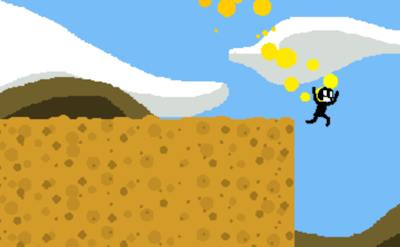 On Fire is a platform / puzzle game that lets you play as a villager that needs to light a bonfire for the village using his own body as a torch. You’ll take control of a guy who is literally on fire and running towards the village. You can control your burning person by using the arrow keys to point to which direction he’ll be running to. The left and right arrow keys will make him move left or right (he’ll always move forward to wherever he’s facing, by the way) and the up arrow key will make him jump. Hold the up arrow key for a higher jump. The space bar will make your character throw the fire forward until it hits another person that will then become the new torch. The goal is to make sure the fire reaches the bonfire at the end of each level. You’ll do this by going through pits and obstacles, sometimes even waterfalls and dinosaurs, until your reach your destination. If the fire is thrown and there is no one there to catch it, then you will have to re-start and try again. Anything in your way, like trees and other flammable things, should also be burned down along the way (you can do this by simply going through them).
Always remember that when you are on fire, you should stop, drop, and roll. Let’s make this game an exception, though, as we need this fire to burn as long as possible so we can ignite our bonfire. If you’ve been wanting to play a funny little game about flames, then On Fire is the way to go.