Motorcycle games are always good no matter what the season and they will always be fun to play. Moto X3M 3 is the 3rd game in its series of Dirt bike games, and if that’s not an indication of how well the series is doing, then I don’t know what is! It’s been a good run for this series, but will the latest entry fail to deliver or will it become the catalyst for a 4th game? 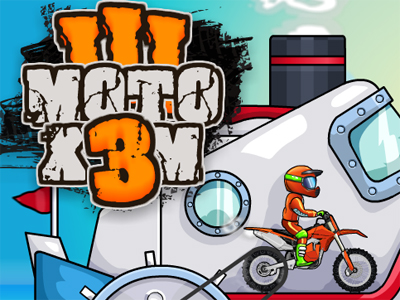 Moto X3M 3 is a dirt bike stunt game that lets you control a dirt bike in a huge number of courses while trying to get the best time available through each course. You will have a few different options on getting there, one of them, which is the more boring option in my opinion, is to race through the course without doing anything. This will get you the best time in most cases. You can also play through the course and do stunts along the way, finding the best stunt that you can use for each situation since some areas will not let you do a certain stunt due to your landing. You’ll be able to do backflips, frontflips, and wheelies depending on the situation. You can play the game by using the W or the up arrow to accelerate and S or down arrow to drive in reverse (also your brakes if you are currently going forward). You can push your weight to the back of the bike by pressing A or the left arrow key and move your weight forward by using the D button or the right arrow key. That will be your main way of doing tricks and stunts. Stunts, by the way, can decrease your time by a certain amount, depending on the stunt done, whenever done within a course.

Moto X3M 3 is a fun game especially for the extreme dirt bike lovers, and even for those who aren’t. The adrenaline pumping game is just what you need to get a dose of that adventurous high, so get to playing this game, and you won’t regret it.