You are a soldier on a mission to save a facility from total destruction from an unknown virus. You get to the facility with difficulty because of the security system, but only to find out that they are too late. Everyone in there is either already dead or is infected by the virus that’s been turning people into insatiable zombies out for flesh. Will you be able to find out the mystery of the virus or will you succumb to it and get eaten by the zombies? Find out in Close Quarters Combat. 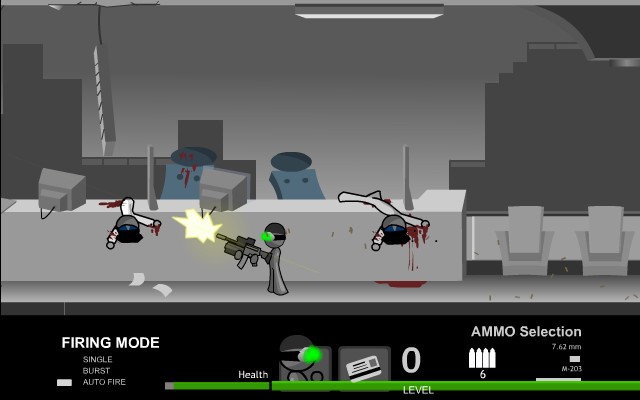 Close Quarters Combat is an action shooter game that gives you control over a soldier that’s been tasked to save a facility that has been reportedly spreading a deadly virus. The game is like a little shooter filled with RPG elements like backtracking to different points of the facility to open other areas, or solving a few puzzle, a little like metroidvania games. The goal is to find out what is causing the virus to spread and how you can stop it. The game’s controls are very simple and will be very familiar to those who play a lot of PC shooter games. To walk around, you can press the A and D buttons on your keyboard to walk left and right, respectively. Pressing the W button will have your soldier jump (stylishly with a flip, too), and pressing S will have your soldier crouch down, useful when trying to go through small spaces. The mouse cursor will be used to aim your gun, and pressing the left mouse button will make your soldier shoot. If you run out of bullets and try to shoot, your soldier will reload his gun automatically, but you can also reload at any time by pressing the R button.
The zombies in the facility will be out to get you, and a little part of you will try not to kill them because you know they were people, but the survival part of you tells you to shoot them right in the face before they eat your brains out. If you’ve been looking for a good shooter with a story the likes of a Resident Evil game, then don’t miss out on Clo