Despite the overwhelmingly huge amount of action strategy games around the web, it’s a bit hard to find a game that can attract a crowd, since a lot of the games now are bland or ripoffs from other games. Brave Shorties 2 is a great take on the genre and uses cute sprites for the characters, as well. 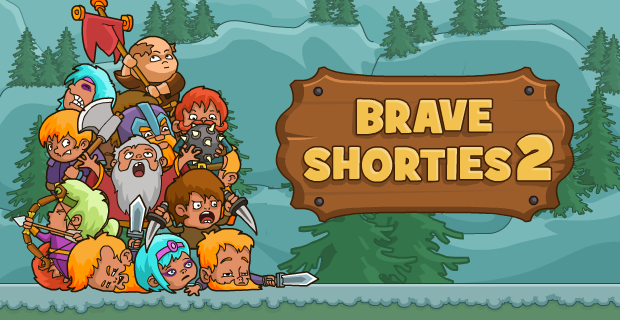 Brave Shorties 2 is, as mentioned, an action strategy game with a bit of a resource management element. The game is pretty simple as there aren’t too many controls to use aside from your cursor to point to the different options on the screen, including skills when on the battlefield and the buy and sell options in the team setup screen. Despite being a very simple game to look at, it’s a very deep game when it gets to the battlefield. In any case, before you get to the field, you’ll be at the team setup screen where you’ll have to setup your team that will head out to fight. You’ll have only two options during the start of the game, which is the warrior with good attack and defence but can only attack while they are in the front of the field and the archers that has a slightly lower attack and a very low defence but can attack from anywhere on your formation. Your formation screen will show you where you can put warriors, and it’s a bit of a weird set up, but you can put warriors anywhere that you’ve unlocked in one huge square (you can even stack warriors). Once you are done with the formation, you send them out to battle. The melee attacking warriors can only attack people in front of them, so if you stacked them on top of another warrior, anyone below them cannot be attacked by that warrior, so planning beforehand is a huge factor in this game. Will you survive through the skirmish and defend your land, or will you let those nasty monsters take over? Find out in Brave Shorties 2!