Stay aside Robocop! Sorry but a new space cop has finally arrived, equipped with a much cooler vehicle and with much more powerful skills to eliminate enemies. Yes, you heard it right and it is nobody else than you! You now have the opportunity to drive a spaceship and enter an action packed battle in this fascinating game from Filipe Sheepwolf (creators behind successful series like Red Driver and Dj Sheepwolf Mixer). Red Flight is a very impressive and highly recommendable 3D shooting adventure that takes you to a futuristic environment in which your mission is to maneuver a police space car and eliminate all the enemies  who are trying to invade your planet.

The game offers a bunch of impressive features that are probably way far beyond your expectations including a lot of customizing features, an easy-to-manage upgrade system, dynamically-changing stages, four different missions to explore including epic boss battles, and a lot of other unlockable features such as Neon Lights, 8Bit Worldand Glass City which can drastically change the interface during battle.

Missions will indeed vary in each stage including war, collect , thunder and boss. Each will have certain tasks to follow and you just have to accomplish them without letting your spaceship be destroyed, otherwise, you will end up replaying the same mission until you manage to make it through. Completing them will allow you to earn points which allow you to buy new skins for your car or better yet buy upgrades to make your spaceship more efficient in battle. The prices , however, will increase exponentially which forces you to take more missions and earn more points. You can also replay previous levels as many times as you want to.

Generally, everything works perfectly with Red Flight, not to mention the games’s wonderful animation and impressive voice overs in a way that you would really imagine yourself in such an action packed and breathtaking situation!  With the success of the Red Driver series, I’m sure Filipe Sheepwolf will also come up with an  impressive sequel to this game.

Calling all prodigies! It is time again to put your skills and knowledge in a great test as Splapp-Me-Do released the sequel to their highly successful Impossible Quiz game. Contrary to what the title suggests, The Impossible Quiz 2 is not really impossible at all. Well, unless you are genius enough to answer all the mind twisting questions and surpass all the tricky challenges without committing a single mistake. There will be hundreds of questions to deal with and if you think you are the most genius guy to ever lived, then feel free to play this quiz and show off how high your IQ is. 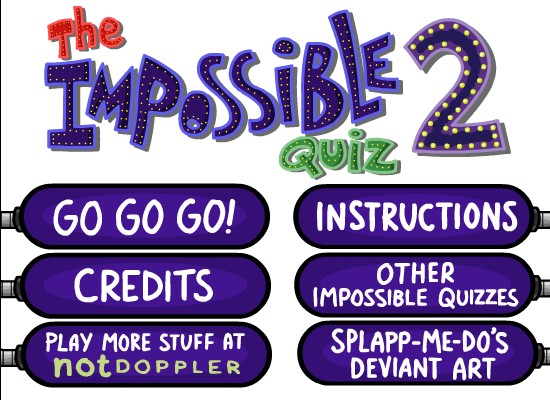 Title screen of The Impossible Quiz 2

The Impossible Quiz 2 actually works the same way with the first game but with a lot of improvements that make this sequel even more captivating. The rules and mechanics are very simple: nothing more but to complete the quiz by answering all the questions correctly. This might sound too simple but the game is surprisingly tricky and fiendishly challenging. The questions that are being thrown are not factual but more of being logical which requires you to visualize and analyze the questions carefully before giving your answers. A single mistake will cost you a life point. From three lives, The Impossible Quiz 2 offers two more additional lives for the player and that prolongs your journey.

Most questions are multiple choice but you will also encounter some absurd mini games and other mind-twisting and brain-draining logical puzzles along the way. Interestingly, this sequel introduces power items that you will encounter from time to time so kindly take advantage of them. You can use “Skip” to skip a question or use the “Fusestopper” to stop the time bombs which can be found in some levels. They are, however, not applicable every time so you still need to use your skills to win this game.  If you lose all the lives, the game will come to a quick end and that gives you no other option but to start the game back from the very beginning. Don’t worry, you will be dealing with the same set of questions so passing through them should be easy!

If you enjoyed exploring the endless space in the first Run game, then you will surely find its sequel in the series created by Joseph Cloutier even more captivating. A vast of wonderful improvements were made for this game and it features a lot of new features that are way beyond our expectations. Run 2 is basically a simple yet fun and surprisingly addictive endless running adventure in which you take control of an alien and your goal is nothing more but to clear all the levels by successfully making it to the finish line. This, however, is not going to be an easy task, considering that you will be passing through a tunnel with limited platforms to step onto.

One of the game’s most notable changes is the Skater mode. It introduces a new avatar in a separate mode. The Infinite Mode, however, was taken out of the concept but the Edit Mode remains accessible. I also like to note that the Main campaign features different stages to Skater Mode. Speaking of stages, the graphics here were drastically changed from flat surfaces to 3D and much more engaging platforms. You can freely navigate the map using the arrow keys and jump over from one platform to another using the spacebar but these controls can be configured from the main menu based on your own preferences. Since these are tunnels, you can freely flip the map by simply stepping on the side.

Another interesting addition in this game are the bonuses. These are the glowing orbs that are randomly located in each level. Collecting them requires extensive skill which added an extra challenge for this interesting sequel. You will also encounter special platforms which will either help or harm you along the way. Edit Mode is also a great experience. Here, you can customize your own map, add and arrange platforms the way you want them and once you are done and satisfied, you might consider sending your entry to Kongregate or better yet challenge someone to try your very own creation. It is a highly addictive game indeed and something you can confidently consider on top of your game list!

You can also check out my review for Run 3!